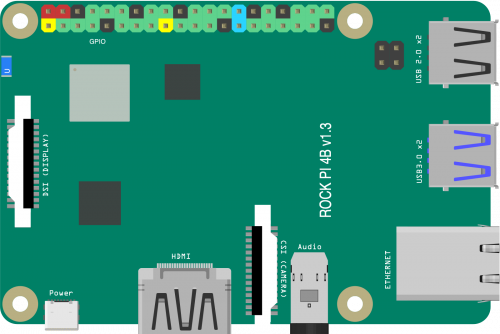 ROCK Pi 4B board

Single Board Computers were never a market years before and there is no clear definition of Single Board Computer. The definition of SBC from Wikipedia: A single-board computer (SBC) is a complete computer built on a single circuit board, with microprocessor(s), memory, input/output (I/O) and other features required of a functional computer. This definition doesn't describe the difference of SBC with a PC mother board. But in our definition, the SBC should meet at least the following features

Before the name of SBC get more known, we call it the development board or the embedded boards. They exists in all kinds of electronic devices in daily life. Thanks to Raspberry Pi, the SBC gets more popular to a wider audience. And the big brand such as Asus comes to this market means it at least attracts their attention. (A story between Asus and Radxa, one customer took an 21inch all-in-one device monitor to our office years ago, it's a thin client based on RK3188 made by Asus. The customer wanted us to custom a device similar to that for them. We have dumped the image from the device, and bingo, we found Radxa stuff inside, in their production units)

So here at Radxa, we've been thinking:

What we should do if we want to make a good Single Board Computer for all the users?

First, the form factor. We think that being physical compatible with Raspberry Pi, the most popular SBC in the world is very important. Although we don't think that the Pi form factor is the best but the eco-system of the Pi form factor is already big enough. There are a lot existing enclosures made for the Pi. A lot of CAD work is already done for the Pi by the community, we hope we can re-use them directly or with little modification. It saves a lot. Also, there is no perfect form factor for SBC since the usage is so wide. Apparently Asus agrees with that too.

Second, we want to design a board for users all over the world, not only for the makers in the US or Europe. but for makers in China, in India, in the Russia, and all the developed and developing countries. We've noticed the growing demanding of hardware from the developing countries such as India. So the cost of ROCK Pi should not be high. Raspberry Pi has set a good price tag for the SBC, the challenge for us is, how to upgrade the Pi while keep the cost low.

Let's talk about from the CPU. The Raspberry Pi uses four 64bits A53 core, the Tinker Board is four A17 core, not 64bit, not sexy, beyond the A53, there are A72/A73/A75 cores. For the next generation SBC, we want the cpu is one from A72/A73/A75. Rockchip RK3399 is almost our one and only choice. Let's look at the SoC, mainstream ARM SoC vendors who providing A72/A73/A75 can be counted in two hands, Qualcomm/Mediatek/Samsung/Hisilicon/Freescale/Rockchip. The top ones are primary phone SoCs, not Linux friendly. Freescale is known good for Linux and long life time, but their new IMX8 are not that popular comparing to IMX6. Rockchip, on the other hand, spent much efforts in Linux and open source. The cost of their chip, uses the words from Chen Feng, the VP of Rockchip, is "It's a steal". Rockchip announced 10 years chip supply and support for RK3399, that's a good news for us. In our opinion, RK3399 is the new IMX6.

The advantage of RK3399 is that it supports some new high speed controllers such as LPDDR4, which gives us better bandwidth and thanks to the shipping volume of mobile phones with LPDDR4, the cost is actually lower than DDR3. This is really good for the users. We equip LPDDR4 for all models of ROCK Pi 4, 1GB/2GB/4GB are all 3200Mbps speed LPDDR4.

eMMC module becomes a trend for the SBC as the first choice OS storage media. Comparing to microSD card, eMMC provides higher performance and better stability. EMMC module was first introduced by Odroid, and thanks for Odroid open source the pin definition and connector type (a 2x17 B2B connector) of their eMMC module. Other companies such as PINE64 can make compatible eMMC modules. For ROCK Pi, we made it further, we choose high performance eMMC chips and make compatible eMMC modules but providing additional connector for stronger fixture on ROCK Pi. For fool-proof, the additional connector is 2x15, so you can't plug it wrong. Both the ROCK Pi can work with Odroid/PINE64 eMMC module, or the ROCK Pi eMMC module can work on Odroid/Pine64, in theory.

The wifi/bt combo we choose is from the same family of Raspberry Pi 3B+'s wifi/bt. Cypress 43455(formerly Broadcomm) is the one on Raspberry Pi 3B+, and we decided to use Cypress 43456 because it offering the same wifi but upgrading Bluetooth 5.0, it's a feature we can't resist. Bluetooth 5.0 offers wider transferring speed and range, from actually testing, the `hcitool lescan` is very fast. We use an onboard ceramic antenna instead of PCB antenna for better signal performance.

There are four native USB controller in RK3399, two USB 3.0, two USB 2.0, we route each to a USB A port. One of the USB 3.0 has OTG function, so we added a hardware switch to manually change host/device mode. The users needs a USB type A to type A male cable to connect to PC for USB firmware upgrading, Android ADB debug etc. Please note that, the two USB 3.0 ports are dedicated controllers, each is 5.0Gb/s theory speed. In theory, we can have more than 340MB/s speed at the same time of two USB 3.0 ports. But for design such as NanoPi M4, four USB 3.0 ports behinds a USB 3.0 hub looks better on spec but four ports share 5.0Gb/s limiting the speed.

The power supply for the ROCK Pi is really a challenge because unlike other SBC less than 10w power consumption which you can just use 5V/2A to power it. the ROCK Pi's design power consumption is 15w to 18w. Take USB 3.0 as an example, the spec current for USB 3.0 is 900mA, one port is 4.5W max. So if you have four USB 3.0 ports like NanoPi M4, you need provide 22w at least for the USB only. To meet the higher power consumption of the electronic devices, USB PD is come up with up to 100w power delivery. We support that on ROCK Pi, with USB PD, we can support common USB PD adapter voltage 9V/12V/15V/20V to power the ROCK Pi. For example, you can just plug the 87W power adapter of recent generation Macbook Pro to ROCK Pi and not worrying damage the board. But there is a disadvantage of USB PD, that is the USB PD adapter are expensive currently. Remember we want to design the ROCK Pi for all the countries? Yes, we want a lower cost power adapter solution. So we add Quick Charge adapter support for it. Because everybody uses smart mobile phones nowadays, and even the entry level smart mobile phones supports Qualcomm Quick Charge. So we can just re-use the power adapter of mobile phones to power your ROCK Pi. It can work at 9V level by default, which can provide 9V/2A 18W power supply for ROCK Pi.

Please note that, although we don't recommend, you can actually power ROCK Pi with ~5V adapter, we have no issue powering it with the 5.1V/3.4A adapter from Radxa Rock2. But if the power adapter output is just 5V, the actual voltage from the adapter to the cable on the other end will drop a little bit, it may not boot.

The 40 PIN GPIO was the first thing to be defined before we start the schematic design. We have checked the PIN definition of Raspberry Pi, Tinker Board and ROCK64 to decide what's the best for us. We found that it's nearly impossible to make 100% GPIO compatible since the SoC pinout differ a lot. So we choose to be compatible of the primary function of Raspberry Pi series. The 40 pin GPIO on ROCK Pi4 offers the following:

Tinker board did a good job with the 40 pin header in color, which makes it easier to identify the power/ground and other signals. We adapted that too. You may find the color on ROCK Pi is darker than the Tinker Board, that's because the supplier told us, the color on the connector of Tinker Board are painted twice, first layer is the white background on black plastic, then paint other colors on white. But the disadvantage of doing that is the second layer color is easier to drop. We did notice that on the Tinker Board in our office the color fade out on the header even without much usage. So we choose one layer color painting on ROCK Pi, looks less shining but lasts longer.

Although the RK3399 supports 4lanes MIPI, we choose to sacrifice the performance and keep compatibility, because we know how hard it is to find a DSI display or a CSI sensor just works out of the box with long life time and good supports. We choose to support the official Raspberry Pi display and Cameras. Currently, the official Raspberry Pi 7inch display and the Raspberry Pi Camera V2 IMX219 is working on ROCK Pi all models, the supported software is both Android and Debian though we need better tuning for the image quality under Linux. Thanks Asus for pushing Rockchip to support the Raspberry Pi display and camera, we can port the drivers to RK3399 platform with less work. That's the example of eco-system and the importance of compatibility.

This is one of the modern interface on ROCK Pi we like most, we use NVME SSD a lot in the office for development(It always not enough space). With PCIE gen2 mode, the reading/writing speed on ROCK Pi with NVME SSD can archive more than 1000MB/s, this is a great improvement on credit card size SBC! The M.2 connector on ROCK Pi is M key and can plug directly the NVME SSD. Due to the size of board, the 2280 M.2 NVME SSD is actually longer than the ROCK Pi, so we provide a M.2 extension board as accessory for better mounting the 2280 NVME SSD on top of ROCK Pi. A PCIE to SATA is also possible with adapter board making the ROCK Pi a NAS.

The Radxa Team has tried our best and pushed our limits for the hardware design of the ROCk Pi 4 on every aspects. The hardware has been revised multiple times and now v1.3 is the massive production version. We have made agreement with some distributors and we are all excited about the new product. We hope to ship them to you soon.

We will start a new post about the software and eco-system support for ROCK Pi.