Difference between revisions of "RockpiS/dev/sdnand-install"

ROCK Pi S supports maskrom mode, which is a special running mode the CPU is waiting for command from USB OTG port. The PC tool we use to communicate with ROCK Pi S in maskrom mode is rkdeveloptool, an open source tool by Rockchip.

Step 1: Make sure rkdeveloptool is set up on host computer

Step 2: Boot the board to maskrom mode

The ROCK Pi S Board presents two buttons. They are Reset key and Maskrom key.

The Reset button serves as the hardware reset button. short press and release the button,the system will be rebooted.

To boot ROCK Pi S into maskrom mode, you need

It means the device is in maskrom mode now.

Now we can proceed the next step to flash.

On your PC, run the rkdeveloptool

Download the loader (flash helper, important) to init the ram and prepare the flashing environment etc. If you don't have it, you can download it from here

Now the device should boot from the SD Nand now.

This step serves for someone who want to boot ROCK Pi S on uSD Card when there is one system image on SD Nand.

It means the SD Nand is erased successfully.

secondly, select rk3308_loader*.bin and rock-pi-s.img , If you don't have it, you can download it from here 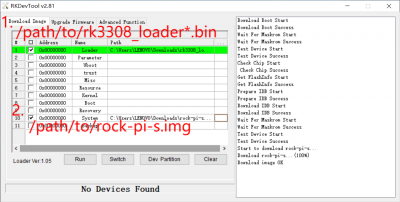 lastly, if see “Download image ok”, that means you are sucessfully install on SD nand from Windows .

If you have issue with flashing via USB OTG, start a new post on the forum. https://forum.radxa.com/c/dev